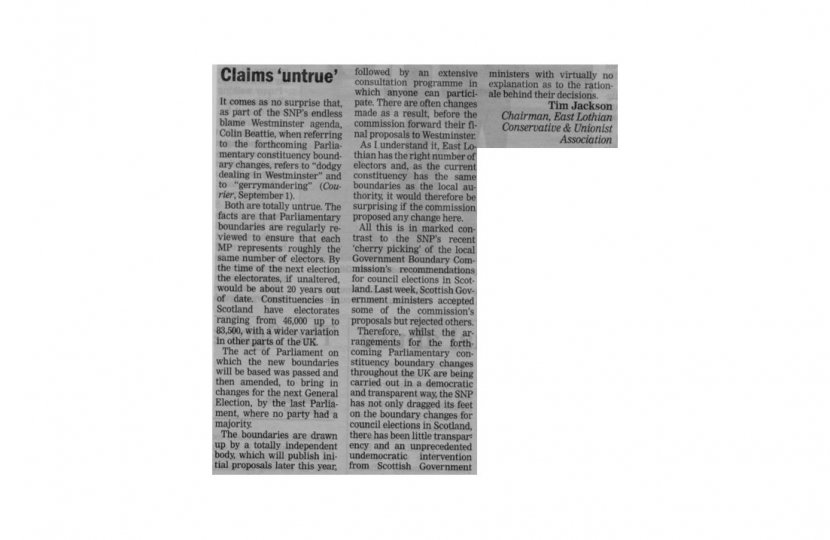 "It comes as no surprise that, as part of the SNP's endless blame Westminster agenda, Colin Beattie, when referring to the forthcoming Parliamentary constituency boundary changes, refers to "dodgy dealing in Westminster" and to "gerrymandering" (Courier, September 1).

"Both are totally untrue.  The facts are that Parliamentary boundaries are regularly reviewed to ensure that each MP represents roughly the same number of electors.  By the time of the next election the electorates, if unaltered, would be about 20 years out of date.  Constituencies in Scotland have electorates ranging from 46,000 to 83,500, with a wider variation in other parts of the UK.

"The act of Parliament on which the new boundaries will be based was passed and then amended, to bring in changes for the next General Election, by the last Parliament, where no party had a majority.

"The boundaries are drawn up by a totally independent body, which will publish initial proposals later this year, followed by an extensive consultation programme in which anyone can participate.  There are often changes made as result, before the commission forward their final proposals to Westminster.

"As I understand it, East Lothian has the right number of electors and, as the current constituency has the same boundaries as the local authority, it would therefore be surprising if the commission proposed any change here.

"All this is in marked contrast to the SNP's recent 'cherry picking' of the local Government Boundary Commission's recommendations for council elections in Scotland.  Last week, Scottish Government ministers accepted some of the commission's proposals but rejected others.

"Therefore, whilst the arrangements for the forthcoming Parliamentary constituency boundary changes throughout the UK are being carried out in a democratic and transparent way, the SNP has not only dragged its feet on the boundary changes for council elections in Scotland, there has been little transparency and an unprecedented undemocratic intervention from Scottish Government ministers with virtually no explanation as to the rationale behind their decisions." 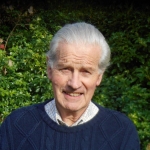