Agent & Vice Chair of the Association

Born and raised in Edinburgh, Sarah's early years were centered around sport and, in particular, rhythmic gymnastics.  Sarah was selected as a member of the Scottish Team from the age of 11, representing her country on many occasions and becoming Scottish Senior Champion in the mid 80's.

A qualified teacher, Sarah taught PE up to and including A Level.  She taught at a secondary comprehensive in Berkshire for 7 years, before retraining as a rural surveyor at Cirencester Royal Agricultural College.  After 4 years as Head of Marketing for a design company in London, Sarah returned to Scotland to manage an estate in the Borders.  She jointly ran this as a very successful business for over a decade, before moving to East Lothian in 2012.

Sarah has had a very strong connection with East Lothian for all of her life - her parents have had a home in North Berwick for 50 years, moving permanently to the coastal town 30 years ago.

Sarah first joined East Lothian Conservative and Unionist Association in 2013 becoming their election agent and orgainising secretary in September 2015. Her first election as Agent was in May 2016 and saw the successful return of Rachael Hamilton to the Scottish Parliament as an MSP for the South of Scotland Region.

Meeting with the Prime Minister at No. 10 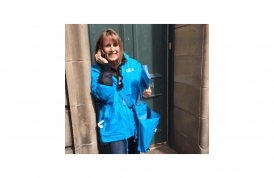