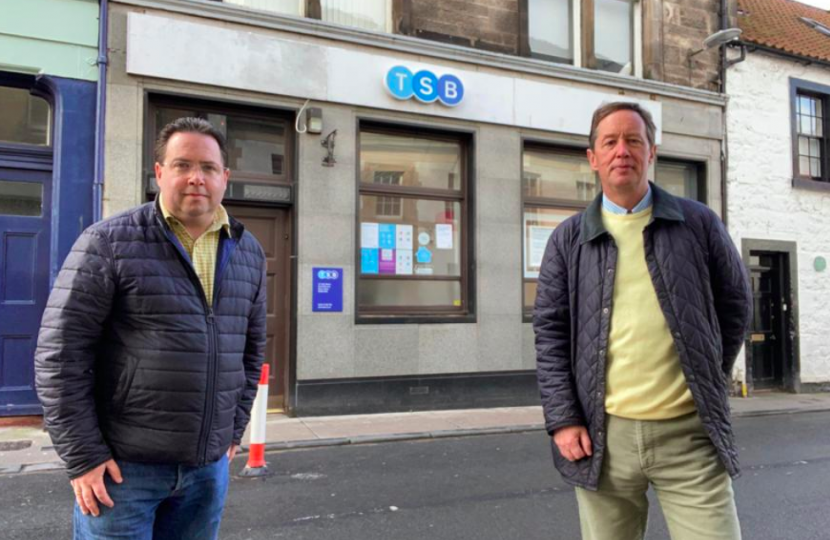 Following disappointing news that TSB is to close its branch in North Berwick, local Scottish Conservative & Unionist Councillor Jeremy Findlay and Holyrood candidate Craig Hoy have spoken out against the decision.

Councillor Findlay says he will be writing to the Chief Executive of TSB, Debbie Crosbie, to demand that the bank reverse its decision, which follows the deeply regrettable decision to close the Dunbar branch earlier this year.

Councillor Findlay also announced that he would be introducing a motion at the next full meeting of East Lothian Council, asking that the Council oppose the move by TSB and request it takes measures to attempt to persuade TSB to think again.

He said: “I am very disappointed to hear the news that TSB has taken the decision to close their branch in North Berwick. This will be another blow to banking services in my ward and comes in the wake of the closure of the Bank of Scotland branch in Gullane three years ago and the more recent closure of Aberlady post office.

“I will be writing to the Chief Executive of TSB to express my dismay at this decision and will use the next meeting of Full Council to ask fellow councillors to support my motion to get the full weight of the Council in opposition to this branch closure.

He added: “TSB has a responsibility to their customers in North Berwick many of whom rely on that branch for their banking needs. They must reverse this decision."

East Lothian’s Scottish Conservative and Unionist Holyrood candidate Craig Hoy confirmed he has also written to the bank warning that local branches are “a lifeline” for residents.

He said: “Having access to a branch on your doorstep is absolutely vital, especially for older residents and those in rural communities with poor broadband signals. The proposed closure of the TSB in North Berwick is bad news for the elderly and vulnerable who need to access banking facilities in the place where they live.“