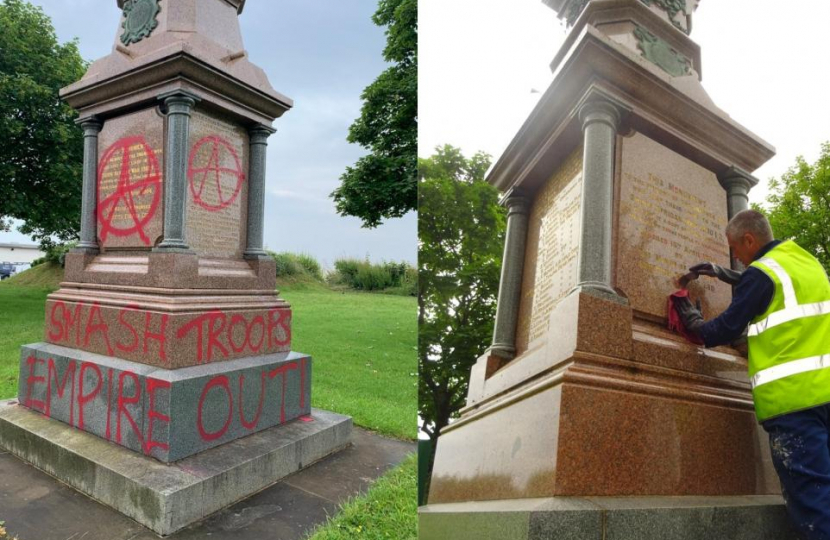 This follows repeated graffitiing and damage to Prestonpans War Memorial over the past decade.

Meghan Gallacher MSP, who is the Deputy Leader of the Scottish Conservatives, will bring forward plans for a Member’s Bill, calling on the SNP-Green Government to put specific laws in place to prevent the vandalism of war memorials in South Scotland.

The bill would amend the Vandalism Criminal Law (Consolidation) Scotland Act passed in 1995, to bring Scotland into line with England and Wales, where an offence of damaging war memorials was incorporated into this year’s Police, Crime, Courts and Sentencing Act.

A charge of criminal damage anywhere in the UK carries a maximum prison sentence of 10 years, but in Scotland there are no specific protections for war memorials.

Attacks on war memorials have increased in the last decade and Mr Hoy has said his colleague’s bill would act as a tough deterrent to those desecrate the memorials.

He said: “War memorials are at the very heart of our communities in South Scotland and we must ensure that they are better protected going forward.

“That’s why I’m delighted that my colleague Meghan Gallacher has brought forward this Member’s Bill designed to do just that.

“Current laws are clearly not enough of a deterrent against would-be vandals of memorials in South Scotland but the amendments included in these proposals would be a very positive step forward.

“Attacks on war memorials across Scotland have steadily increased over the last decade and that is hugely upsetting for people in South Scotland, especially those with loved ones named on these tributes to our fallen war heroes.

“With this bill already enjoying cross-party support, I hope it can become law as quickly as possible to offer better protection to much loved war memorials in South Scotland.”