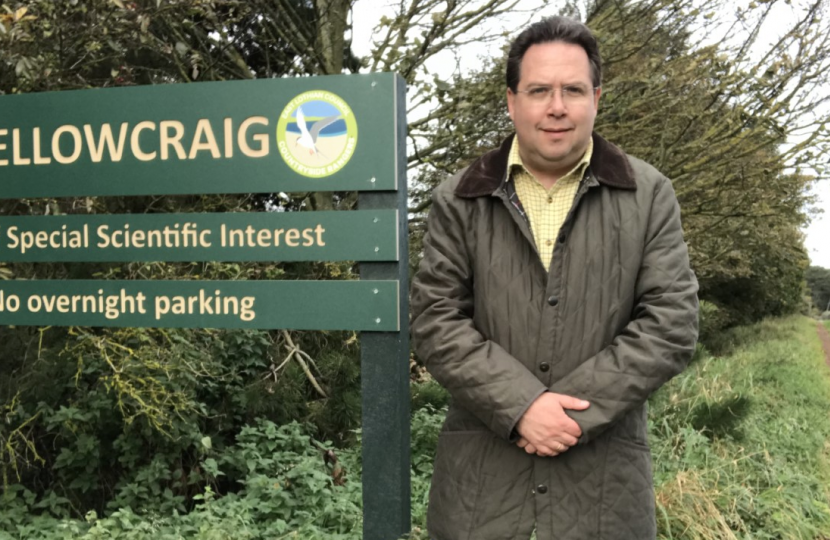 Scottish Conservative and Unionist Councillor Craig Hoy is to seek East Lothian Council’s support for a range of new measures to assist the Countryside Ranger Service deal with an “unprecedented” increase in the number of campers along the county’s coastline.

Following a summer during which the Ranger Service was severely stretched, Mr Hoy has thanked the team for their commitment and dedication, which largely prevented a marked increase in so-called "Dirty Camping".

Mr Hoy, who is his party’s Climate Change Champion, said: “Almost all of East Lothian’s coastline is designated and protected, yet it is the busiest by visits per kilometre in Scotland. With an unprecedented number of people visiting East Lothian during recent months, this has put a huge and unsustainable pressure on the Ranger Service and other authorities.

“Thanks to their massive contribution, which resulted in daily and intensive face-to-face engagement with campers and visitors during the summer, East Lothian was largely spared the Dirty Camping problem which hit other parts of Scotland.”

Despite efforts to promote responsible Wild Camping, which is sensitive to coastal and rural areas, Mr Hoy warns that a small minority failed to observe the rules, with some visitors dumping tents and sleeping bags, failing to clear up waste and damaging protected sites with fires and barbeques.

Mr Hoy recently visited Yellowcraig Beach, where he met with Neil Clark, the Head of the Ranger Service and the Principal Countryside Officer of East Lothian.

Following the meeting, Mr Hoy, who is also the Scottish Conservatives’ Holyrood 2021 candidate for East Lothian, noted that greater pressures on the Ranger Service would be likely to emerge next year.

“East Lothian is a hugely popular area for visitors. With many people still not able to take their annual holiday, an increasing number will come on camping trips to coastal areas such as Yellowcraig and Tyninghame. This concentration of campers, and those in caravans and mobile homes, at our coastal areas cannot currently be sustained and action is needed before next summer.”

To tackle the problem, Mr Hoy will call on the Council to back a wide-ranging motion, which urges officers to publish a report into the number of campers who flocked to the county after the lockdown and which sets out possible solutions to the "problems and pressures" this created.

The Conservative Group will also call for new policies – and possible By-Laws – and is asking council officers to write to the Scottish Government and NatureScot to call for an urgent review of the Scottish Outdoor Access Code.

Mr Hoy says: “The Scottish Access Code is clearly not fit for purpose, especially given the huge increase in people seeking to camp along our coastlines and rural areas. The code is too vague, lacks clear definitions of different forms of camping and fails to offer specific rules to manage our coastal and countryside areas. Currently anyone can say they are Wild Camping and pitch a tent almost anywhere, which is simply not sustainable.”

Among other measures proposed by Mr Hoy and Conservative Group Leader Lachlan Bruce in a motion (see below) are the greater use of local public awareness campaigns, including encouraging local camping equipment suppliers to offer point of sale information about local rules and Wild Camping best practice.

“By bringing on board those who sell camping equipment we would be able to ensure that the increasing number of novice campers fully understand how to camp responsibly at East Lothian’s beaches and rural areas,” Mr Hoy says. “Preventing the problems we faced this summer becoming far worse next year requires a concerted effort in the coming months. This is what we will be pushing for at the next meeting of the council.”

1.    Notes that East Lothian’s coastline is the busiest, by visits per kilometre, in Scotland; yet virtually all of it is subject to national, European and international designations to protect natural heritage.

2.    Recognises the huge pressures East Lothian Council’s Countryside Ranger Service, Police Scotland and other agencies have been placed under as a result of a significant increase in the numbers of people visiting and camping in East Lothian during the Covid-19 crisis.

3.    Notes an unprecedented level of camping near to beaches and other countryside locations and recognises the distinction between legitimate and responsible wild camping, which is sensitive to rural and coastal areas, and so called ‘dirty camping’, which threatens natural habitats.

4.    Commends and thanks East Lothian Council’s Countryside Ranger Service for their commitment and dedication during this extraordinary period and praises the service for their daily and intensive face-to-face engagement with campers, which largely prevented a dirty camping problem developing in East Lothian

5.    Recognises the likelihood of similar pressures in 2021, and calls on East Lothian Council to:

•    Request an officer report outlining estimated numbers of all campers, including those in caravans and mobile homes, within East Lothian during the 2020 summer season, detailing problems and lessons to be learned from this experience.

•      Request officers to present options to:

•      Ask officers to write to the Scottish Government and NatureScot (formerly Scottish Natural Heritage) to highlight the experience of the Ranger Service in East Lothian; and to press for a further review of the Scottish Outdoor Access Code to deliver a more proscriptive and robust framework.

•      Ask officers to take forward initiatives, such as public awareness campaigns, including engagement with local camping equipment suppliers and other retailers to offer point-of-sale information about the rules and regulations surrounding camping within East Lothian.

The Commonwealth, G7 and NATO Summits