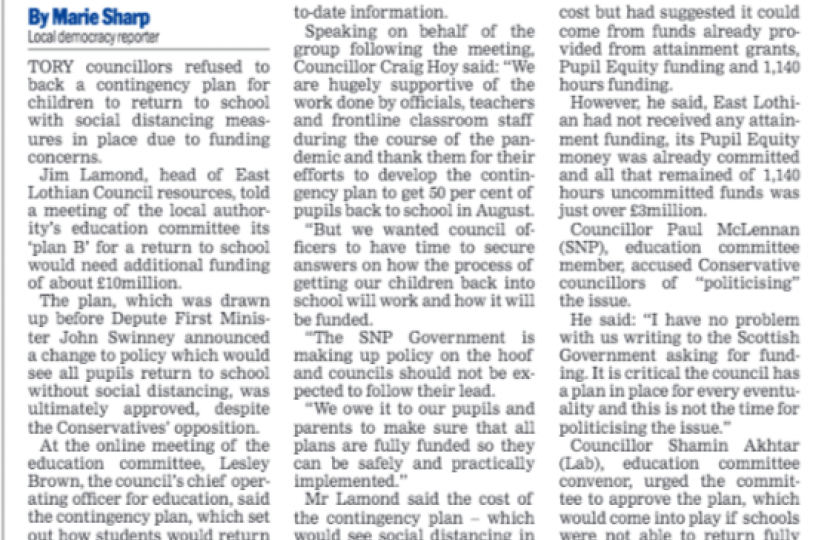 The Scottish Conservative Group on East Lothian Council has warned that the SNP Government is making up education policy "on the hoof" warning that a multi-million funding shortfall could put other council services in jeopardy.

The warning came as the Scottish Government performed a U-Turn on its plans for pupils to spend 50% of their time in the classroom along with "blended" home-based learning.

Speaking on behalf of the Scottish Conservative Group, Councillor Craig Hoy said: "We are hugely supportive of the work done by officials, teachers and frontline classroom staff during the course of the pandemic and thank them for their efforts to develop the contingency plan to get 50% of pupils back to school in August.

“But with the Scottish Government having performed a massive U-Turn on its policy just two days ago, we wanted council officers to have time to secure answers on how the process of getting our children back into school will work and how it will be funded.

“The SNP Government is making up policy on the hoof and councils should not be expected to follow their lead. We owe it to our pupils and parents to make sure that all plans - including the contingency plan to be adopted should a total return not be possible - are fully funded so they can be safely and practically implemented.

“We also have serious concerns about the long-term effects of blended learning, which effectively means thousands of children staying at home for large chunks of the school week. In the absence of the opportunity to pause and review the plan following John Swinney's chaotic U-Turn, we voted against the contingency measures.

“Had the minority Labour administration followed our lead, and the SNP councillors not simply taken their orders from Nicola Sturgeon, East Lothian Council would now have the muscle to press the Scottish Government for additional contingency funding to get as many children as possible back to school."