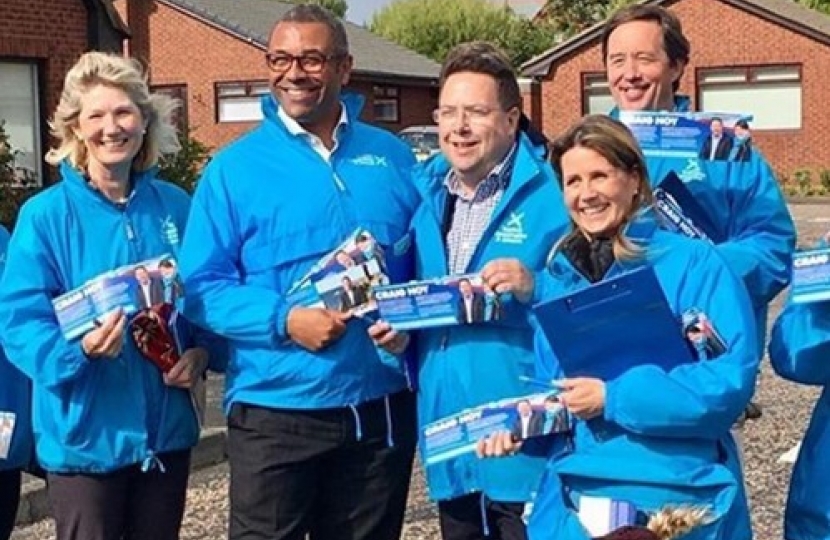 A senior Cabinet Minister has visited East Lothian to give Craig Hoy his support to be the county’s next MSP.

Conservative Party Chairman James Cleverly MP visited Dunbar to meet local voters on the doorsteps, before attending a reception with over 60 local members of the East Lothian Conservative & Unionist Association in Haddington.

Mr Cleverly, who is also a Cabinet Office Minister, gave his strong support to Craig Hoy’s Holyrood campaign. He joined Craig and a team of canvassers who spoke with local residents in Dunbar.

He said: “It was great to join Craig Hoy, our Scottish Parliament candidate for East Lothian. The sun was shining and the response from local residents was fantastic. Only Craig Hoy can beat the SNP in 2021.”

Mr Hoy added: “It’s increasingly clear that Labour can no longer win in East Lothian. In May 2021 it’s going to be a straight fight between myself and the SNP. With the Union at risk from the threat of a deeply damaging second independence referendum, a vote for Labour or the Lib Dems will allow the SNP to win in East Lothian.”

Tim Jackson, the Chairman of the East Lothian Conservative & Unionist Party added: ‘We were delighted to welcome James where he was able to hear at first hand from residents in Dunbar that people in East Lothian don’t want another damaging and divisive independence referendum. We also welcomed his confirmation of the new Prime Minister’s emphatic support for a strong and united Union.”

Earlier this year Craig Hoy successfully fought off the SNP in the Haddington and Lammermuir By-Election, where he secured a six per cent swing for the Scottish Conservatives after Labour saw its vote drop by over 12%.

The next Scottish Parliamentary election takes place on May 6, 2021. The Scottish Conservatives are the first party to announce their candidate for the poll.